The 2021 NFC West odds emphasize what most NFL pundits already know: it’s the most competitive division in football. The Rams and 49ers are tied with the shortest odds to win the division (+200), but the public is wildly split on the two teams. That’s due in large part to the Cardinals and Seahawks, two teams also garnering a decent chunk of the NFC West futures handle and bets. The NFC West is the only division in which each team is backed by at least 10% of divisional bets and handle. The Cardinals, picked to finish last, has the second-shortest odds of any team projected to finish last and has a win total of 8, the largest of any team predicted to finish last.

The NFC West is probably the most competitive division in the NFL. The Cardinals have the longest odds to win the division at +600, only the Eagles (+500) have shorter odds for a team with the longest odds in its respective division, and the NFC East is close for all the wrong reasons.  Although the Cardinals are predicted to finish last,  would it really surprise anyone if Murray took the next step and led the Cardinals to a division title, and an NFL MVP award? Arizona’s win total opened at 7.5, but moved to 8 in late July. 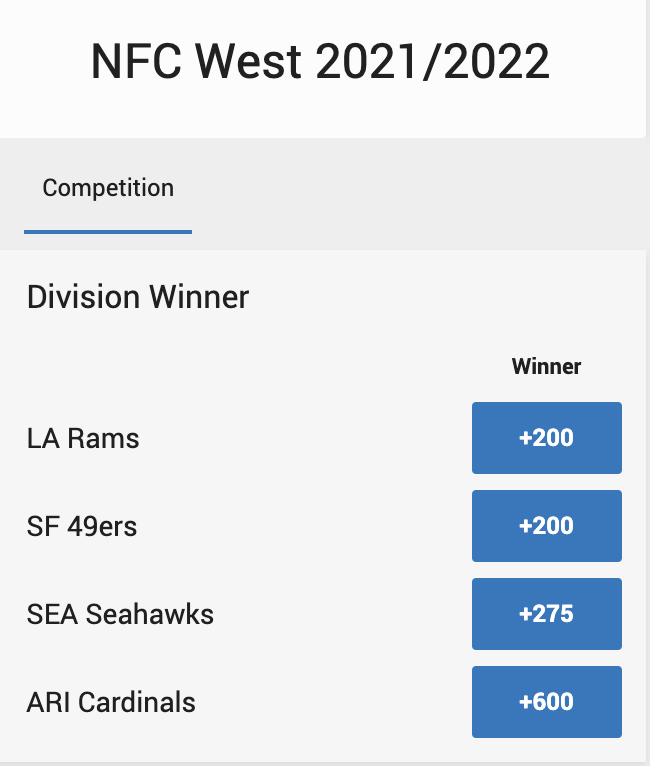 The NFC West is the most competitive division in football, with all four teams being capable of a postseason run.

That said, my money is not going on in Arizona (More on why in a bit).

The Rams traded former No. 1 overall pick, Jared Goff, to Detroit for an older former No. 1 overall pick in Matthew Stafford. The addition of Stafford has the public salivating, as the Rams are backed by 53% of the NFC West handle and 46% of the NFC West bets, nearly twice the percentage of the second most wagered-on teams. In fact, Stafford is also a trendy pick to win the NFL MVP, currently backed by the third-largest percentage of MVP handle, trailing just Patrick Mahomes and Josh Allen. In any other division, the Rams would be a really good pick, but there’s too much competition, and too much betting value to back the Rams with confidence.

The 49ers are a tricky team to predict because of two reasons: First, San Francisco was ravished by injuries last season worse than any other team. It’s hard to take what we saw last season and apply it to 2021 predictions. Secondly, the 49ers have two quarterbacks, and you know what they say about having two quarterbacks. If you have two quarterbacks, you don’t have any. San Francisco is backed by 18% of the NFC West handle, the second-largest percentage of any team. But in terms of NFC West bets, the 49ers are backed by 12%, the smallest percentage of any team.

The 49ers could be a playoff team, but it might be best to wait until you’ve seen them on the field before making significant futures wagers.

I do think Seattle represents good value at +275 to win the NFC West. Quarterback Russell Wilson is among the best in the game (when the coaches let him) and they have a new offensive coordinator in town. Shane Waldron should be an improvement. I am quite optimistic about Russell Wilson this season.