For the first time since 2008, a team not named the Patriots won the AFC East, which makes the 2021 AFC East odds all the more interesting. Led by MVP candidate Josh Allen and offseason acquisition Stefon Diggs, the Buffalo Bills weren’t just the top team in the AFC East, but one of the top teams in the entire NFL. But with success comes expectations, and the Bills haven’t had sustained success since the early 1990s. So what do we make of the 2021 AFC East odds? Is there enough value on the Bills? Can Mac Jones lead the Patriots to the playoffs in his rookie season? BetRivers.com has a wide variety of 2021 AFC East odds, futures, player, and team markets for you to choose from.

A season ago, the Bills were the best AFC team not named the Kansas City Chiefs. Josh Allen and Stefon Diggs were arguably the best QB-WR tandem in the league, and now that the Bills are a known commodity and legitimate Super Bowl contenders, the public is all over Buffalo. The Bills are backed by 66% of the handle and 83% of the bets to win the AFC East. At -150 to win the division, only the Chiefs (-305), Buccaneers (-200), and Packers (-177) have shorter odds to win their respective divisions. The Bills are also second behind the Chiefs in total bets (18%) and handle (12%) to win the AFC Championship. Those are some lofty expectations for a team that hasn’t put together three consecutive winning seasons since the early 1990s.

With Ryan Fitzpatrick in Washington, it’s officially Tu’a Time in Miami. Tagovailoa showed signs of great promise, but also showed while he is still very much a work in progress. The Miami backfield is crowded with above-average backs, but no real stars. That should mean big things for the underrated but talented receiving corps. The bets I like? Tu’a Tagovailoa OVER 3850.5 Passing Yards and Jaylen Waddle OVER 700.5 Rec. Yards.

I never trust Bill Belichick to stick with one running back, which opens things up to hammer an under. 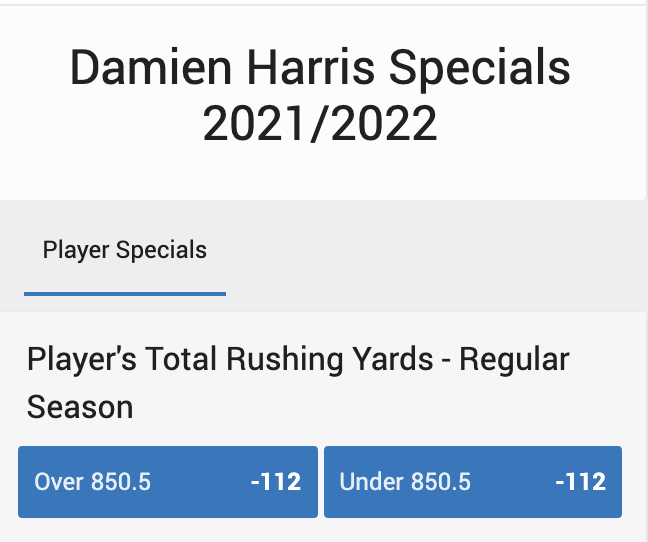 Bill Belichick loves using multiple RBs. Will that continue in 2021? We think so.

Damien Harris was tied for the team lead in rush attempts (137) with Cam Newton. Harris picked up 691 yards while Newton ran for 592. With Mac Jones in New England, you can expect less designed QB runs, but that doesn’t necessarily mean Harris is going to get the bulk of the carries. Sony Michel and James White are capable of having a big game and taking lead back duties for a few weeks, which will reduce Harris’ total. I’m on Damien Darris UNDER 850.5 Rushing Yards.

The Jets at +2500 to win the AFC East is just too much value to ignore. I think this is the year of the rookie QB and for whatever reason, Zach Wilson is being a bit overlooked. The Jets have a ton of talent at the skill positions and a new coach who’s brought a ton of energy to the team. Do I think they actually win the AFC East? No, of course not….do I think they win it 6-7% of the time? Yes. +2500 represents value.