The NFL season gets going on September 9, and as the first week of games approaches, it’s time to take a look at the 2021 AFC South odds and futures at BetRivers.com. The AFC South is a top-heavy division that went through some offseason changes with Julio Jones arriving in Tennessee and the Colts losing two key cogs for the first half of the season. Longtime Poker broadcaster and sports bettor David Tuchman is here to preview the best futures bets and 2021 AFC South odds he likes for the NFL regular season. If you enjoy watching this team sport, you should bet online with BetRivers.

There are a handful of futures bets I like on BetRivers.com and I’ll list them all here with a brief reason why we’re wagering on each one. Today, we’re touching on the AFC South.

Before we break down the 2021 AFC South odds, watch VSiN’s Danny Burke preview several head-to-head props for the upcoming season, presented by BetRivers.

The Houston Texans are a mess. This is a team that won four games last season and got significantly worse. I am assuming DeShaun Watson will not be playing for the Texans this season. Twenty-two women have alleged in lawsuits that Watson sexually assaulted them or engaged in sexually inappropriate behavior.

Houston is very likely to be drafting No. 1 overall in the spring – they are that bad. This is a team I have winning 1 game in their division and when you look at their schedule, you just don’t see many winnable games. Maybe they beat Jacksonville once? Maybe they beat the Jets? If they played Indianapolis early when Carson Wentz was out, I could see a win there, but they don’t play the Colts until Week 6. All told, I see Houston winning maybe three games. It’s not going to be pretty. 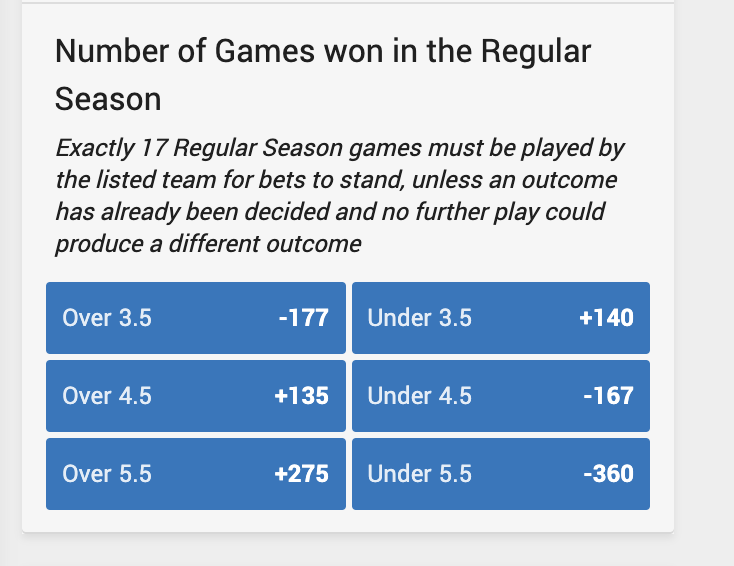 How many wins will the Houston Texans get in 2021? Latest NFL win total odds at BetRivers.com

The Jacksonville Jaguars drafted Trevor Lawrence with the No. 1 overall pick and most experts agree that he’s a generational talent. I’m not expecting him to build Rome overnight, but it’s easier to find success at the QB position in today’s game than it ever has been. The Jaguars have some talent in place and while they only won 1 game last year, they were close in a lot of others.

I don’t expect them to win the AFC south, but at +750, I think there’s too much value to ignore. With Wentz’s injury in Indianapolis, the division is the Titans to lose, but what if something goes awry in Tennessee. At +750, we only need the Jags to win the division 11.7% of the time to break even. I’ve got them winning it around 18% of the time.

The latest divisional odds for the AFC South are live at BetRivers.com.

Along those same lines, I do also like the Tennessee Titans to win the division at -106,  what with a bevy of offensive weapons including MVP candidate Derrick Henry, breakout WR star A.J. Brown, and highly prized offseason acquisition Julio Jones. The Titans are currently backed by 49% of the total handle and 47% of the total tickets to win the AFC South.

The Colts are in a tricky position. Indianapolis opened the offseason as -106 favorites to win the AFC South, but with surgeries to both starting QB Carson Wentz and offensive lineman Quenton Nelson, the Colts are now +140 to win the division. It’s not a massive drop given the weapons on the Titans, but if there are two positions a potential playoff team cannot afford to lose, it’s the quarterback and the team’s best offensive lineman.