It’s time to take a look at the 2021 NFC East odds, and the numbers suggest Washington Football Team will repeat as division champs, a feat not accomplished by any NFC East team since the Philadelphia Eagles in 2003 and 2004. What we do know is that the NFC East is slated to be wildly interesting in 2021.

Washington has arguably the best defensive front-seven in the NFL but is leaning on journeyman QB Ryan Fitzpatrick to lead the offense. The New York Giants welcome back Saquon Barkley, arguably one of the most electrifying running backs in the league, following an ACL tear in Week 2 of the 2020 season. The Dallas Cowboys are in a similar position, welcoming back their most important offensive player — Dak Prescott — following a gruesome ankle injury suffered in Week 5 of the 2020 season. The Philadelphia Eagles said goodbye to Carson Wentz and are fully invested in Jalen Hurts at quarterback, with a wide variety of talented young backs and wideouts at his disposal. But are the Eagles ready to make the leap?

The Cowboys (+145) are the favorites to win the NFC East in 2021, and are backed by 42% of the NFC East bets, the most of any team. Dallas has Dak Prescott back from an ankle injury and the offense can be a juggernaut with him at the helm. If he stays healthy, I expect the Cowboys to routinely put up 30+ points. Keep in mind, they don’t have a great defense so they’ll need to score and keep scoring. 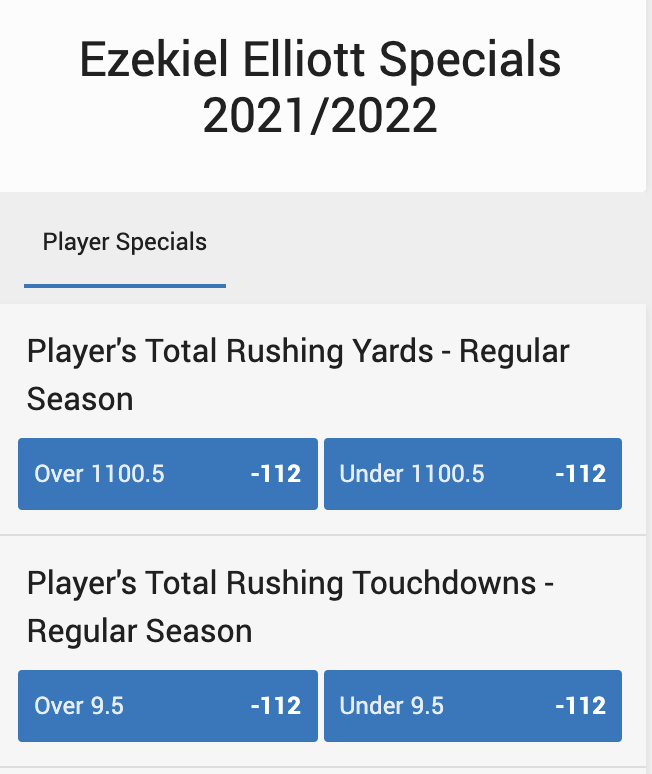 Dak Prescott is back, which means the Cowboys wont have to play from behind as much. Can Zeke get it done?

With this in mind, I’m quite bullish on Ezekiel Elliot. I think people forget just how good he was last season before Dak got hurt.

In New York, the Giants and QB, Daniel Jones got a new toy at WR – Kenny Golladay. Talent has never been the question when it comes to Golladay. It’s always been a matter of, can he stay healthy? His receiving total is only 1000.5 yards which works out to around 59 yards a game.  He’s surpassed that total in 13 of his last 21 games and in five of the games he was under, he had over 55 yards. If he stays healthy for the entire year, he’ll probably get over 1200 yards. According to my charts, he’ll only need 14/15 games to surpass 1000.5 receiving yards. 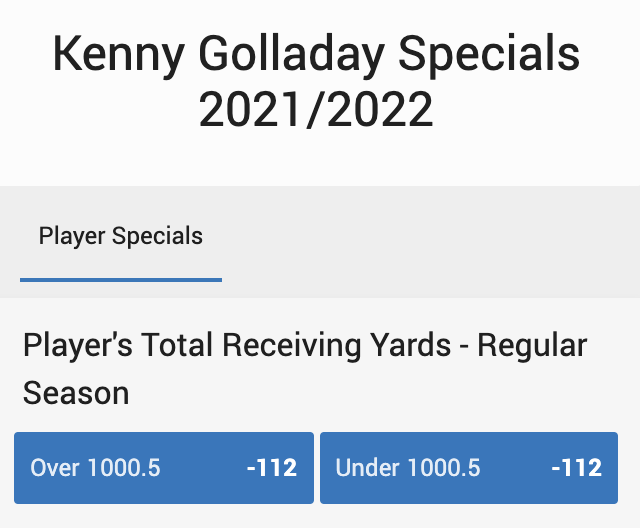 This is an overreaction to an injury-prone player. OVER 1000.5 receiving yards is the play.

Carson Wentz is in Indianapolis and Jalen Hurts is the QB of the future in Philly … for now. The Eagles have a healthy crop of talented, young skill position players in RB Miles Sanders and WRs Jalen Reagor, Greg Ward and DeVonta Smith. But can all the parts come together? Although the Eagles have the longest odds to win the NFC East (+500), the division is entirely u for grabs, as the reigning champs won just seven games and have a new quarterback in tow. Philadelphia is backed by just 7% of NFC East bets, roughly a third of the bets of Giants, the third most popular pick to win the division. But Eagles are backed by 14% of the NFC East handle, which is closer to New York (17%) and Dallas (23%).

Washington’s defense is not in question, thanks to arguably the most talented front-seven in the NFL. On offense, Washington has young stars in WR Terry McLaurin and RB Antonio Gibson and got a great showing from TE Logan Thomas. The team added WR Curtis Samuel this offseason, and Washington’s skill positions look to be much improved. The team also added Ryan Fitzpatrick. But is he the answer? Fitzpatrick is an excellent backup to have on your team, but can he get it done over the course of a 17-game season? The expectations are high in Washington, and while Fitzpatrick has great are talent, he also has a penchant for giving the other team the football.

Washington finished last season 7-9, and has finished the season with a winning record just five times since 2000. On top of that, the NFC East rarely produces repeat champions, a feat that has only occurred five times since 1990.

Kickoff Your Weekend with the VSiN-BetRivers Betting Guide