The final game of Week 10 is here, and it’s almost time to break down the Rams-49ers betting odds for Monday Night Football. The Rams picked up Odell Beckham Jr. earlier in the week, and a day later, lost Robert Woods to an ACL injury, which should thrust the former Browns and Giants wide receiver immediately into the spotlight. But Beckham Jr. is hardly the only new addition for the Rams. Los Angeles is coming off a tough loss to the Titans, arguably the best team in the AFC, which snapped the Rams’ four-game win streak. The Rams are 4-0 on the road this season, although the 49ers have earned two of their three victories at home.

Be sure to check BetRivers.com for the latest Rams-49ers betting odds, and Bet on NFL and be the first to win.

Longtime Poker broadcaster and sports bettor David Tuchman is here to preview the Chiefs-Giants betting odds and provides his analysis on the best bets worth a wager.

I took a week off from sports to focus on the poker tables. The World Series of Poker Main Event was in town and I decided to take my shot. Over 6600 people each put $10,000 down to join the fray – me being one of them. The winner will get $8,000,000 – unfortunately, that won’t be me, but after four long days of poker I did finish in 416th place which was good for a nice chunk of change.

The silver-lining? I’m back in the lab studying the latest trends in sports and how to best capitalize on it in the betting markets.

Lots of NFL and NHL to profit off of, so let’s get to it. Currently, we stand at 40-34 as we head into the final game of Week 10. Let’s break down the Rams-49ers betting odds and provide our picks for Monday Night Football.

You’ll notice that toggle ball underneath the Point Spread and the Total Points – it’s adjustable. If you want the Rams -2.5 or the OVER 46, it’s easily done by moving the ball. In fact, these lines can be moved left or right to wherever you think they need to be. It’s one of the very cool features at Betrivers.com. 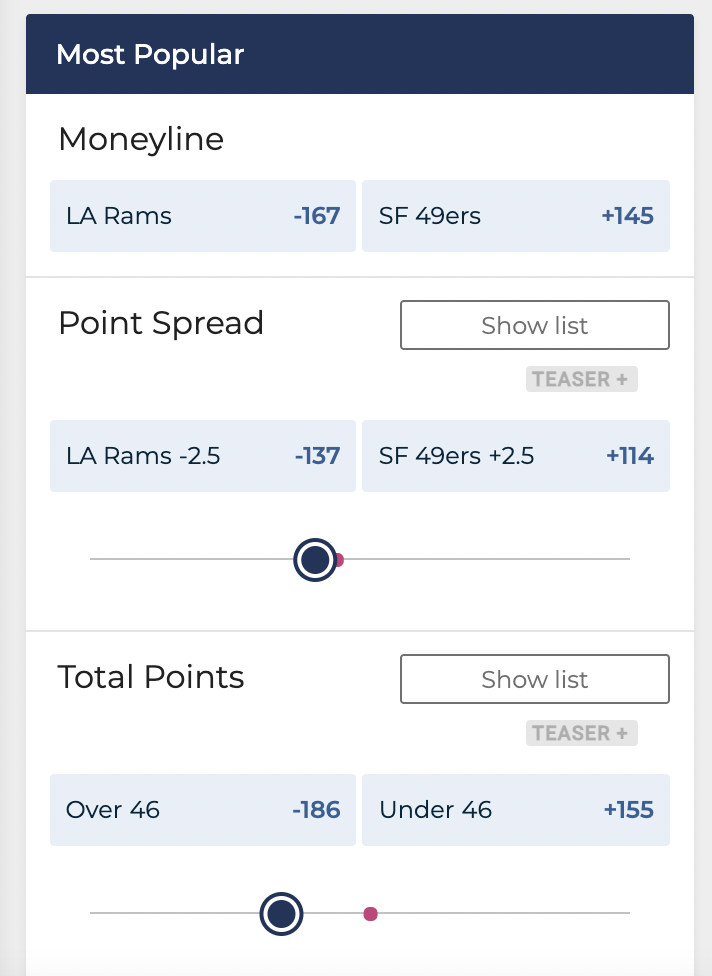 Before I give you my pick for the game, the spread, and the total, I want to tell you that my absolute favorite bet of the night is actually a prop.

Over his first nine games, he’s averaged 11.4 targets per game and 8.2 receptions per game. He’s done this with No. 2 WR Robert Woods in the lineup.

Woods is injured (out for the season with torn ACL) The Rams brought in Odell Beckham Jr, but I wouldn’t expect him to be a huge part of the team’s offensive plans so quickly. Matthew Stafford is under center for the Rams and he will be throwing the ball – expect Cooper Kupp to eat. Barring injury, it’s hard for me to envision a scenario where Kupp doesn’t get his fair share of targets and the San Francisco defensive backfield has no answer for Cooper Kupp. According to PFF, Kupp has the 4th best matchup of any WR this week.

As for the game, the line opened at Rams -4 and has shifted toward the 49ers by ½ a point. The total has drifted higher and now sits at 50.

For the game, I’m loath to give more than a FG in this tightly contested divisional rival game. There’s no doubt that the Rams are the better team, but the 49ers seem to have their number. San Francisco has won five straight against their in-state rival.

As for the total, I’m not a believer in Jimmy Garoppolo. He struggles when under pressure and the Rams front can bring the heat. Add Von Miller to the mix and this could be a tough night for Jimmy G and company. My guess is the San Francisco defense does a good job keeping the game close before the Rams finally win.