With domestic league play wrapped up, it’s finally time to turn our attention to the European Championships, and BetRivers.com is proud to provide a wide variety of Euro 2020 odds, props, teasers and futures. At BetRivers, we offer you one of the world’s largest online sports betting platforms where you can place anytime an European Championships sports bet. For some reason, despite the fact that the Euros are being played this summer, they are still being called Euro 2020. Despite this egregiousness, we will push forward with our believe that any sporting event played in the daylight hours is a sporting event that is worth betting on.

Longtime writer Rob Dauster, the co-founder of The Field of 68 Podcast Network is here to provide his thoughts on the Euro 2020 odds and drops knowledge on the best bets worth a wager at BetRivers.com before play kicks off on Friday, June 11.

So let’s dive into it.

There are essentially seven teams that have been slotted in as contenders to win Euro 2020 based on the way the odds have shaken out: France, England, Belgium, Italy, Portugal, Germany and Spain. The Netherlands are a tier below them, and Denmark is a tier below that. It’s also important to note that the format of this tournament has changed. There are 24 teams in the event. The top two from each of the six four-team groups will advance to the knockout stage, as will the four-best third-place finishers. This means that you don’t necessarily need to finish top two in the group stage to advance, which is fantastic news for France, Portugal and Germany, who were all drawn into Group F.

When it comes to the favorites, I do believe that France is the obvious play. International football is different from the club level in the sense that pressing teams are not the ones that have the most success. Given how disjointed training time can be, teams with organized defenses, good midfields and strikers that can play on the counter tend to be the teams that have had success in recent major tournaments. That’s France. They’ll start three of the same four defenders from their 2018 World Cup title team. They’ll start N’golo Kante and Paul Pogba in the middle. They’ll start Karim Benzema at striker alongside Kylian Mbappe and in front of Antoine Griezmann.

Single elimination tournaments are weird and random, but Les Bleus are deserved favorites.

England are the second favorites at (+600), and while there is a ton of young talent that has broken through on their roster, I’m still fairly unconvinced. The Three Lions have not really looked great against quality competition since the 2018 World Cup. The likes of Jadon Sancho, Jack Grealish, Harry Kane and Marcus Rashford are all familiar names and enormous talents, but they have not played all that many minutes together on the national team.

And then there is the draw. England is in Group D with Croatia, the Czech Republic and Scotland. They are the deserved favorites in their group, but the winner of Group D will play the second-place finisher from Group F in the Round of 16. Group F features France, Portugal and Germany. That’s brutal. I’ll pass.

This is my favorite tier for future bets:

Belgium is ranked No. 1 by FIFA, they won all ten of their qualifying matches, they finishing third at the 2018 World Cup and their best players are all at the peak of their powers. Romelu Lukaku was the second-best striker in the world this past season, leading Inter Milan to the Scudetto. Kevin de Bruyne is one of the best midfielders in the world. And while the likes of Eden Hazard and Dries Mertens didn’t necessarily have their best club seasons, those are still two really talented players.

I also like Italy quite a bit. They’re an in-form side that plays the way you need to play to win these big international tournaments: they are structured, they play a specific style, they are really good defensively and they have one of the best midfields in this tournament. I do remain somewhat skeptical of Ciro Immobile and Lorenzo Insigne, but they are the favorites to win their group and if they do, they’ll draw one of the third-place finishers in the Round of 16. If you can get to the quarters, anything can happen.

That said, my favorite bet in this tier is Portugal, who is the second-most talented team in this field. The problem is that they are also the second-most talented team in their group, which means that they will, in all likelihood, be drawn into a matchup with a group winner in the Round of 16. That’s tough, but I also believe it’s baked into the odds. I like Portugal’s roster significantly more than England’s, and there’s a very real chance we see them face off in the first knockout round.

But look at this talent. They have the Premier League Player of the Season, Ruben Dias, partnering with a veteran in Pepe in center defense. They have Ronaldo leading their attack while flanked by Diogo Jota, Joao Felix, and Bernado Silva. With the likes of Bruno Fernandes pulling the strings and the best fullback pairing in the tournament in Joao Cancelo and Rapheal Guerreiro, there is a lot to like here.

I like all three. I’d rank them Portugal, Italy, and then Belgium at their current prices.

The Austrians were a trendy side in the 2018 World Cup, and while they didn’t quite live up to expectations there, I think they have a really good chance to advance out of their group in the Euros. They’re a good defensive side with a really talented midfield, anchored by Marcel Sabitzer, Konrad Laimer and Xaver Schlager. David Alaba can play all over the pitch, but he’s best as a left back, which is where he’s played for Bayern Munich and where he will play for Real Madrid next season. And their striker, Sasa Kalajdzic, scored 16 goals in the Bundesliga this past season. In a group that also features North Macedonia and Ukraine, getting plus-odds on Austria to finish in the top two is good value.

If you want to roll the dice and a wild longshot to find a way to make a run in this event, Turkey is my favorite of the bunch. Italy are the favorites to win Group A, but beyond that, neither Switzerland or Wales is good enough to be someone that Turkey can’t find a way to beat. Turkey is talented. They are the king of teams that can beat anyone, but that can also lose to anyone. They finished at the bottom of a group that included Russia, Hungary, and Serbia in the Nations League. They also drew against Germany and Croatia, they beat the Netherlands and they smacked Norway, 3-0.

The key is going to be their defending. Their backline features players from Juventus, Leicester, Liverpool and Lille, who won Ligue 1. In fact, they have three Lille starters in their starting XI, and the likes of Hakan Calhanoglu and Cengiz Under have been successful at the club level. Throw in the fact that, if they finish second, their most likely path to the semifinals would feature Denmark and the Netherlands, and there’s a lot to like here.

It’s also worth noting here that Turkey gets Italy in the first match of group play. If they lose that match, as expected, then those odds will get even better.

Here are the full odds to win the event. 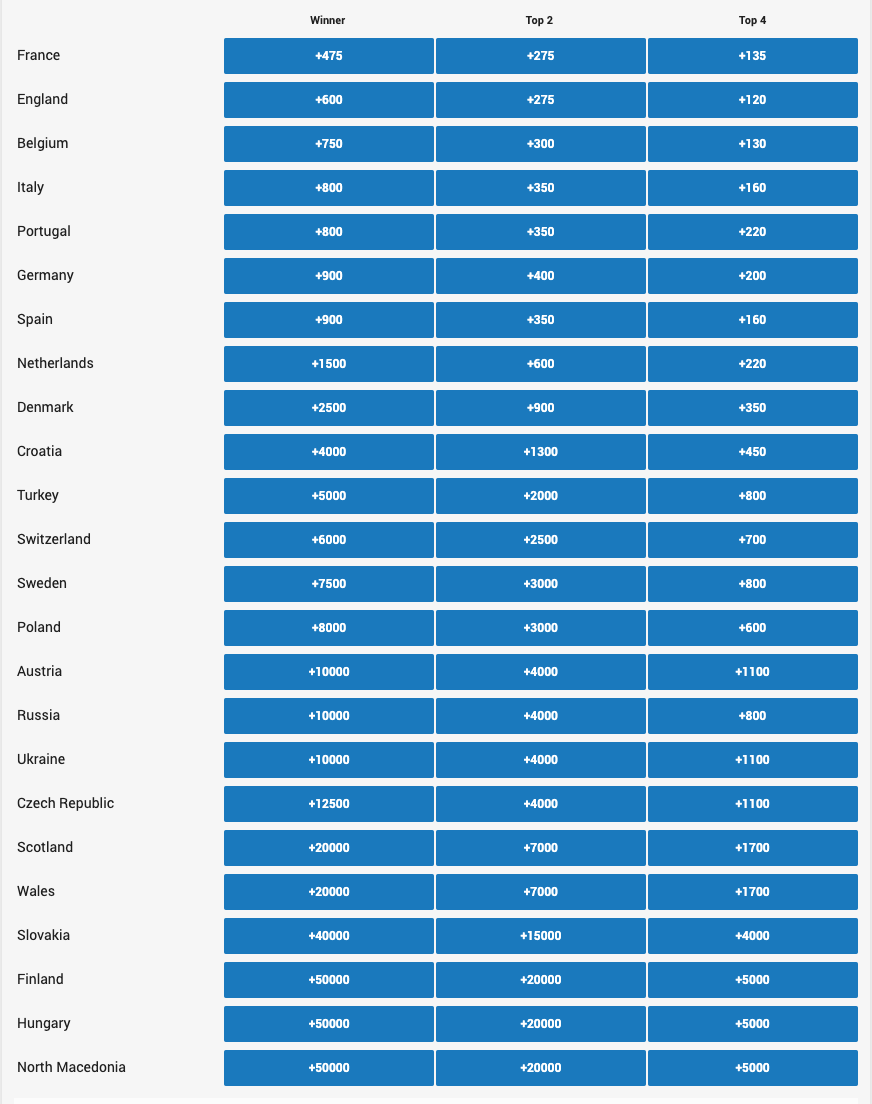 MLB Betting is on Fire in this Free Sports Betting Guide